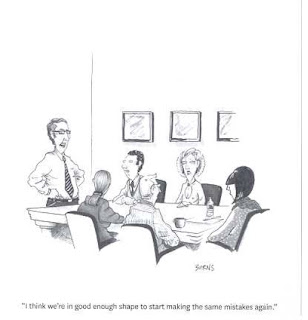 Ready for more of the same? The Green Paper published by the Commission on corporate governance for European Companies was published yesterday.
This paper aims to address three key issues... (stop me if you have heard this before)

1. Board of directors - Non-executives are needed with more skills, diversity and experience and invest sufficient time in the board
2. Shareholder monitoring - Apparently, evidence shows the majority of shareholders are apathetic and focused on short-term goals. The review wants to try and get more shareholders involved and promote long-term returns and sustainability
3. How to apply 'comply or explain' - Companies are not providing sufficient explanations for diverging from the Code

Well, point 3 is perhaps an area which needs looking at. The Combined Code in the UK has increasingly seen more and more adherence to it - see for example Grant Thornton's Corporate Governance Review -, even leading up to the crash in 2008. Despite no "one size fits all" approach there seems to be evidence of firms converging to the same model. A deeper understanding is needed of why do people adhere to the Combined Code or generally corporate governance codes around the EU? One would hypothesise that it is because it attracts investors; but is that really enough to blindly walk in to complying with the Code? I am of no doubt that there is a stronger thought process before deciding on internal governance but a review is needed.

As to boards of directors this could potentially be interesting. The first point may be for at least UK companies is that non-executives are generally experienced and knowledgeable according to a 2009 review by Grant Thornton.

With non-executives becoming more involved does this change the structure of the board and does it affect our understanding of the firm?

It would seem points one and two of the Green Paper go hand in hand. Monitoring is difficult for shareholders and so boards become a market-induced body to monitor executive management. However, if non-executives become more involved then this may incur problems at least from an agency theory perspective. Shareholders will then have to monitor the boards more rigourously and in truth are likely to incur higher agency costs to ensure they do not incur conflicts of interest or shirk responsibilities.

However, I like many others, are not a strong believer of agency theory. For one agency theory often makes the common mistake of seeing the firm as a nexus of contracts. Law however, makes it clear this is not the case. A corporation is its own legal entity with objectives generally decided by the directors.

With the board becoming more involved we seem to be converging away from agency theory, closer to stewardship theory and resource dependency theory. It seems the biggest and boldest move would be to confirm the status of the company and the board as the principal according to agency theory with executive management as the agents.

Shareholders are not well placed to monitor who generally spread risk by having a diverse portfolio of investments and are not concerned enough to monitor any one individual firm. Instead of getting shareholders more involved we should be looking for ways to keep them investing whilst removing levels of direct involvement. This could be done through higher shareholder representation on the board for example.

One issue that needs to be rigorously addressed will be fiduciary law no matter what changes take place. Fiduciary law itself can be explained by agency theory and thus may be problematic if different economic theory such as stewardship can explain the firm.

With non-executives increasing their involvement how will this impact on their liability? Will it be necessary to have clearly defined duties depending on the type of director you are? Increased liability of course, is met with significant opposition and their resistance is usually enough to deter any significant changes.

Non-executives themselves are often executives of other companies. With suggestions of increased time commitment this may have an impact on the people capable of taking directorships. It may also cause stronger friction in multiple directorships or more severe or common breaches of the duty of care with directors spreading themselves too thin.

However, fiduciary law is flexible and based on fundamental principles of loyalty and care by the agent to the principal. As long as the director adheres to these principles owed to the company there should not be a pressing issue, more so for executive members of the board at least.

It seems safe to say the EC needs to think long and hard about the implications of involving shareholders and non-executives more in the company. Under the current structure non-executives should not become more involved without some sort of increased monitoring of them, which is a cost shareholders are unlikely willing to bare. But if directors and the company can be seen as the principal then it may go a long way to improving corporate governance as directors are more attached to the company, capable of understanding the company's needs, and objectives.
Posted by GibbsLaw at 05:27