How do you control outside directors?

The law and regulation of non-executive directors or outside directors has remained elusive. In the UK little is known about their duties and their role can vary.

In the UK the case of The Equitable Life Assurance Society v Bowley [2003] EWHC 2263 opined that non-executives owe the same duties as executives. However, in recognition of their different roles the application of those duties will be different. Bowley concerned section 174 in regard to a director's duty to act with reasonable skill care and diligence. Applying a different application here can be relatively simple. For example in Continental Assurance Co of London plc, Re [1996] BCC 888 the judge recognised that non-executives were expected to have awareness of general accounting standards but not be experts.

But what of the other duties? How would a judge differ in his/her application of say a breach of s176 to not accept benefits from a third party; or s175 to avoid a conflict of interest?

The case of Cambridge v Makin [2011] EWHC 12 (QB) dealt with, albeit in obiter, with the latter duty. Here the judge noted that the meaning of what an "interest" is was not clear, and it was also not clear whether a non-executive was prohibited from competing with the company.

Now the standard of section 175 is very rigid. In its application to executives it is seen that the court will have no consideration as to whether the director acted in good faith, whether the company could actually take the opportunity, they pursued the opportunity in their own time, or the opportunity was not within the company's scope of business. For non-executives, one cannot simply apply the executive standard. As mentioned above, that standard applies to opportunities that fall outside the company's scope of business. This may serve as a severe restriction on non-executives who often hold more than one appointment. If the executive standard is applied, if they gave the opportunity to one principal they realistically could be sued by the other principal.

Determining whether an individual owes fiduciary duties depends on the relationship the parties have. Edelman (2010) 126 LQR 302 submits that they will arise when an individual undertakes a voluntary obligation where a principal will have a reasonable expectation to protection. However, those duties will not be the same in all cases as their extent will depend on the exact nature of the relationship. This is why there is a different application of the fiduciary duties, now imposed by law under part 10, for executives and non-executives. The executive role is much more intimate with the company, which explains the higher standard.

So to determine the extent a non-executive owes a duty to avoid a conflict of interest may come down to intimacy of the relationship with the company. The role of the non-executive has continually developed over the past 20 years since the publication of the Cadbury Report on Corporate Governance in 1992. Their role, although part time, is one of supervision, challenge and strategy. Whilst twenty years ago you may have had a stronger argument to say non-executives do not owe a duty to avoid a conflict of interest, or a very low standard, it is unlikely that still holds true.

The case of Aas v Benham [1891] 2 Ch 244 however demonstrates that the conflict duty can be altered in some respects. This case concerned a partnership rather than directors. Here the partner was excused from a conflict because it fell outside the company's scope of business. The Court of Appeal recently rejected a scope of business test for executive directors in Allied Business & Financial Consultants Ltd, Re [2009] EWCA Civ 751 based on the differences in the relationship between partners and executive directors, but it is plausible a scope of business test can still be applied to non-executives.

From this one problem would remain. What exactly is a scope of business test? When Aas v Benham was decided the ultra vires rule was still in effect to restrain directors from acting outside the company's objects to protect the shareholders and creditors. Thus, a company could not act outside what it had set out to do in its constitution.

So interpreting a scope of business test could be wide or narrow. Do we assess it on what the company actually does? or what it has the potential to do? This may ultimately be fact sensitive though. The court may apply a wider test for a non-executive with a more intimate relationship than a non-executive who is less involved. Such an approach can be infered from the case of Langreen Ltd, Re (unreported) 21st Oct 2011 where the court found that whilst the individuals where called non-executives, they were in fact executives and held to that standard.

So, non-executives may be controlled from acting against his principal's interests via fiduciary duties. However, is this enough? Fiduciary duties are rarely enforced. There may also be unexpected legal problems with any claim since the law is not clearly tested. For example, giving an opportunity to a different principal the director personally may have no profit to disgorge which is the usual remedy. Thus the company may only have a claim for compensation which would require the company to show a causal link between the non-executives actions and the company's loss. This was seen in the case of Item Software (UK) Ltd v Fassihi [2004] EWCA Civ 1244.

Executives, unlike non-executives, receive a complex web of compensation for their role to ensure they remain incentivised. They receive long term performance plans which outweigh significantly any remuneration they receive upfront. This is largely based on agency theory which argues that a director values £1 in the hand more than a promise of £1 in the future. However, as Fama (1980) 88(2) Journal of Political Economy 288 has stated, if you simply pay everything upfront what is to stop an individual consuming more perquisites to the detriment of the company after receiving his remuneration? The result is the mix of ex ante and ex post rewards for the executive to ensure they remain incentivised to prefer the interests of the company over their own.

Non-executives do not have these compensation packages though. In the majority of cases they merely receive a fee for their services and hold a small equitable interest in the company (mean 2010: .041%; median 2010: .008% for independent non-executives)

Applying agency theory to non-executives, what is to stop non-executives assuming more perquisites to the detriment of the company after receiving their fees if they have no long term incentive plans. However, one should not simply jump to the conclusion that non-executives should receive more equity in the company and be paid through long term plans. Non-executives need to be independent. They primarily are meant to monitor the management. To incentivise them too strongly will create a stronger interest in the company, which would bring their independence in to question.

But without controls, non-executives may view additional appointments as a form of perquisite consumption and may continue to accept appointments, and stretch themselves too far to the detriment of the firms who appoint him/her. This may become more of a problem as non-executive fees continually increase to reflect their increased involvement in companies. The mean fees paid to non-executives in 2006 was £817366.67 but by 2010 that figure has risen to £1053295.67. The median is not quite as extreme but still shows an increase from £696500.00 in 2006 to £849500.00 in 2010. 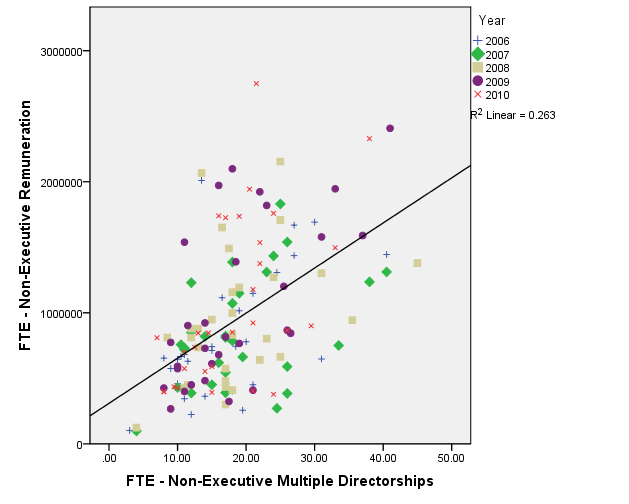 The correlation is significant at the .01 level with Pearson's Correlation at .513**
Thus there may be a strong case for introducing restrictions on non-executive appointments since incentive plans are not a reasonable alternative. Some other EU states have restrictions such as Germany which only permits 10 (The German Stock Corporation Act section 100) additional appointments and in France it is 5 (The French Recommendation of Corporate Governance 2011 Part II Para D.2). Anecdotal evidence suggests non-executives or outside directors in the EU accept more appointments than in the UK. Thus a restriction of 10 may be meaningless. It is submitted that a restriction set at no more than 4 or 5 to be more appropriate.
Posted by GibbsLaw at 04:19